“Franny: I WANTED TO TAKE THIS OPPORTUNITY TO TELL YOU HOW FABULOUS YOU WERE. THE WORK YOU DID IMPROVISING AND ACTING WAS OUTSTANDING. YOU ARE A VERY TALENTED ACTRESS AND YOU REALLY STOOD OUT FROM THE CROWD. PEOPLE WERE COMMENTING ON HOW GOOD YOU WERE, AND I WANTED YOU TO KNOW THAT I AGREE. KEEP ACTING.”
- SKY GILBERT

SMASHES (2017), Fundy Fringe Festival - Saint John, NB
​*WORLD PREMIERE*
+ "Franny is a marvelous actor, making it difficult to to tell what is improvised and what is rehearsed. A quippy, slapsticky romp, you will entertained from start to finish. ☆☆☆☆☆" -Grid City Magazine
+ #1 Preview Pick from THE EAST MAGAZINE - "Five shows we're really looking forward to . . . #1: SMASHES!" -The East
+ Top Preview Pick from GRID CITY - "Three shows of extra merit . . . #1: SMASHES! For pure theatrical electricity SMASHES is a strong comedy that showcases Franny McCabe-Bennett’s writing and acting skills. Her references to the romantic musings of feminist Charlotte Perkins Gilman juxtaposed through modern eyes drew a lot of laughs from the audience. Looking forward to seeing the complete show!" -Grid City Magazine

Image created by The East Magazine: 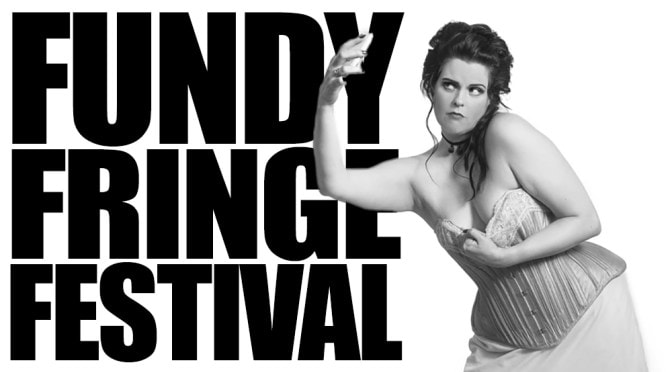 Original photography by Amena Assaily Photography.
​From the SMASHES guest book:
+ "OMG LOVED IT! YOU ARE SO TALENTED!!"
+ "The best comedic writing and acting I've seen in a very long time! Perfect!!"
+ "As someone who recently came out, this show very much resonates with me. Thank you!"
+ "Thank you! I learned much about a fantastic author but I think I learned something about myself as well."
+ "That is one of the best things I have ever seen. Loved it!"
+ "Hit me in the heart"
+ "Loved it. One of the best"
​+ "A MUST SEE"
​
Five Alarm (2017) by Kristen Da Silva, Port Stanley Festival Theatre, directed by Simon Joynes
*WORLD PREMIERE*
+ "The cast is top notch. ... This production is worth the drive to Port Stanley! ... Ellen (Franny McCabe-Bennett) is the comedic heart of the play. ... the laughs just keep coming!" -London Free Press
+ "A delightfully funny romp that keeps you guessing ... true to life performances ... a standing ovation was the tribute for tonight's outstanding performance of the world premiere of Five Alarm." -Port Stanley News

Perfect Wedding (2015), West End Studio Theatre, directed by Yo Mustafa
+ "Caught Perfect Wedding in Oakville tonight. Saw a perfect performance by @Franny_McB. Don't miss it!" -August Theatre Co. (Kristen Da Silva)
+ "Franny McCabe Bennett is an instinctive scene-stealer whose comedic timing is, like the play’s title, PERFECT. Every bit of body language, stance and posturing (even the histrionic bits) are gem-like." -Ontario Arts Review, Oct 2015
​
​Audience comments (via Facebook, Twitter, email):
+ "Amazing!"
+ "You stole the show!"
+ "We love love loved it. Fantastic show. Franny was fabulous!"
+ "Your penchant for comedy is a tour-de-force. You should be SNL-bound!"
+ "Thank you for the wonderful entertainment. Looking forward to seeing you on stage again."
+ "Franny, you don’t know me but you were wonderful in the show. The truth that shone through in your performance was the bedrock of the humour. Terrific job!"
+ "Franny-  I laughed so hard I thought I was going to bring up. The Perfect Wedding was PERFECT!!!! Your timing is superb. You are a gifted actress and comedian. "
+ "You are the best thing about that show... you kept the comedic pulse and the audience loved you. Hope you had a great time! Would love to come see your comedy act sometime! Great to see you doing so well and keeping up the good work."

XOXO: The Relationship Show (60 min), Toronto Fringe Festival, Two Juliets*
+ "With her last performance (for now) in Toronto on July 11, you will not want to miss this lady bringing her fab brand of performance to the Fringe stage. Franny McCabe-Bennett has been charming Toronto Fringe audiences with her comedy cabaret XOXO: The Relationship Show ... McCabe-Bennett’s voice is an important one. It’s a delightful, funny, and intelligent hour, and based on the Toronto run, Winnipeg is in for a treat! With her impressive body of work, ongoing residency at Yuk Yuk’s, and a writing style that has brought on comparisons to Tina Fey ... big things are happening for [Franny]!" -Artist Spotlight: Franny McCabe-Bennett, Crew Magazine, July 2015
+ "If you enjoy smart, funny women as much as I do, I would certainly recommend this show.  ... My personal favourites were McCabe-Bennett’s “First Kiss” in which she recounts her first night out as a[n out] bisexual woman, and the closing number “Where Did You Go?” about the modern phenomena of exes simply dropping off the face of the planet, AKA social media ... McCabe-Bennett particularly stood out as a natural comic." -Mooney on Theatre, July 2015
+ "The stand out moments of this show were the singing scenes, especially their ode to the "Isle of Starbuck". Check out this show, ladies and gents. Franny and Meghan might just charm the pants (or indeed, skirt) right off you." -Gay Theatre Toronto, July 2015
+ "McCabe-Bennett is [a] focused performer; she gives her line readings a zing, especially in a nicely detailed stand-up scene." -Glenn Sumi, NOW Magazine, July 2015
+ "...strong scenes, especially a song about [sexting] set to Britney Spears’ “Oops I Did It Again,” complete with energetic choreography and McCabe-Bennett is at her absolute best when she engages the audience genuinely and tells the story of her first kiss with [a woman]." -TWISI Theatre Blog, July 2015
+ "Meghan Chalmers and Franny McCabe-Bennett simply OWN the Theatre Passe Muraille Backspace with their presentation of XOXO: The Relationship Show. With sketches (the girlfriend interview is hilarious) to songs (some amazing original material, and send-ups – the pair performing The Isle of Starbuck is just AWESOME!), to stories, this show is entertaining, incredibly funny, and had the audience practically in tears with their performances. And their performances are fantastic. These two are incredibly in sync with one another, the banter, and dialogue coming off as completely natural ... The pair have great chemistry not only with each other, but with the entire audience, and they have come to play! Which is great news for viewers because they both come across as so damned likable that you want to hang out with them for the hour that the show runs and just have a good time with them ... these gals are ones to watch!" -The Mind Reels, July 2015

The Beaver Den, JazzSquared
+ "Franny McCabe-Bennett and Izad Etemadi bring down the house!" -Drew Rowsome, "The Beaver Den: You'll Be Able To Say You Saw It When", Feb 2015

XOXO: The Relationship Show (60 min), Hamilton Fringe Festival, Two Juliets*
*WORLD PREMIERE*
+ "Meghan Chalmers and Franny McCabe-Bennett are the perfect duo and I am so glad I got to experience their unique cabaret style. The show is a tour de force for the women – a non-stop mix of song, comedy, spoken word, monologues, and movement. Each segment transitioned brilliantly to the next and I was thoroughly entertained all the way through." -I Heart Hamilton, Sept 2014
+ "Consider them the Tina Fey and Amy Poehler of the Hamilton Fringe. That's shorthand for saying Meghan Chalmers and Franny McCabe-Bennett, the writers, directors and stars of XOXO: The Relationship Show, have the kind of fantastic comic chemistry we rarely get to see between women on the stage. [...] Using a blend of sketch comedy, theatre and music, Chalmers and McCabe-Bennett are entirely likeable, goofy and given to occasional pratfalls in their quest to illuminate the complexity of dating in the modern age. ...Chalmers and McCabe-Bennett showcase their talents to mock how silly and stupid mating rituals can be-and they point to the universal truth that in the search for love, we never tire of trying." -Raise the Hammer, July 2014
+ "XOXO is a clever and thoroughly–entertaining show written, directed, and performed by Meghan Chalmers and Franny McCabe–Bennett: the Two Juliets. [...] The songs...are incredibly witty, thought–provoking, and beautifully sung. The harmonies are glorious!" -VIEW Magazine, July 2014
+ "Had me in stitches... I was most impressed with the Two Juliets’ willingness to play. The piece was never shy of high-energy honesty." -The Theatre Reader, July 2014
+ "Funniest thing I have seen on stage in a long time... Highly recommended." -urbanicity, July 2014
+ "Chalmers and McCabe-Bennett show versatility, comedic timing and great chemistry... A fun, fresh and recommended hour." -Raise the Hammer, July 2014

XOXO (25 min), Two Juliets*
+ "Two girls, an open studio, and a lot of heart, XOXO is not any run-of-the-mill comedy. [...] Franny is hilarious, flat out. She delivers lines with impeccable timing, and a facial expression that, alone, would have you busting a gut. Her sarcastic lines delivered bluntly, will send you reeling." -Katie Stoneman, Hamilton Fringe Festival Review, July 2013
+ "The duo of Two Juliets (Meghan Chalmers & Franny McCabe-Bennett) put on a terrific show in XOXO, a must see comedy about relationship struggles. Like Abbott and Costello, Meghan set up the bottles and Franny knocked them down. The chemistry they exhibited in their performance was flawless. [...] This isn’t just a show for women. It’s a show for everyone who’s been in a relationship." -Thomas Allen, Hamilton Fringe Festival Review, July 2013
+ "My only complaint about XOXO is that at a spare 25 minutes, it’s far too short. I left the show wanting more. Lots more. More of Meghan Chalmers and Franny McCabe-Bennett¹s zany charm, boundless energy and hilarious insights into the rollercoaster ride of love and relationships." -Anne Bokma, Hamilton Fringe Festival Review, July 2013

Hush, Gay Play Day Festival
+ "The material is well-trodden, but the cast (Leigh Elliot, Katie Messina, Jaime Polatynski, and Franny McCabe-Bennett) is uniformly excellent and that makes all the difference. Most of the action is tense as mother and daughter circle each other hurtfully. There is, however, a very amusing scene involving an awkward encounter with a nun [played by McCabe-Bennett] who is trying to be a unifying force for the broken family." -Mooney on Theatre, "Gay Play Day 2013", Sept 2013
+ "Strong work by the cast with some difficult, sensitive topics." -Life With More Cowbell, "Drama, pathos and hilarity - now with more lesbians at Gay Play Day", Sept 2013

Avenue Q, Hammer Entertainment
+ "In more than a few personalities, Franny McCabe-Bennett is a comedic delight. Her ‘Mrs. Thistletwat’ has the most outrageous Brit accent and her influencing bear could cause the most uptight to blow a better nature." -Ontario Arts Review, "Avenue Q Revisited", April 2013